I love milk candies, and pastillas is one of those milky delights that I grew up with and dote on! Those ube halaya pastillas are particularly a favorite, as my late grandmother would prepare them for my siblings and I as a treat when we were kids.

Lately, ube has been scarce. Powder substitute is readily available at baking stores, and even an ube-flavored condensed milk which is easier to take a grab of since it’s available in almost all supermarkets.

We are still on enhanced community quarantine, and I have been craving for ube pastillas, so I made a batch at home just like how my grandmother used to make them. But since ube is a very-hard-to-find root crop where I live, I opted to substitute ube with flavored condensed milk. The ube halaya pastillas which what we usually make tastes very good, but this one made with ube macapuno flavored milk could pass as a commendable substitute. Not equally as delightful as the one made with real halaya, but for sure better than those sold at the convenient stores that’s mostly made with sugar, and sells at P5.00 to P10.00 a pop.

2. Fold until fully mixed together.

3. Then, add 1/4 cup from the 3/4 cup of milk powder to the mixture, continually folding until mixed together. Then add another 1/4 cup milk powder, then fold again. After the third cycle, the mixture should be ready for shaping them into tiny balls by hand.

4. Pinch a small piece of the milk mixture and roll them in your palm until they form into bite size circles. Then roll it in milk, then sugar.

I was able to make five (5) jars containing 25 ube bonbons each, and another big jar of 70 pieces. Yields about 200 ube bonbons! 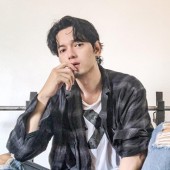